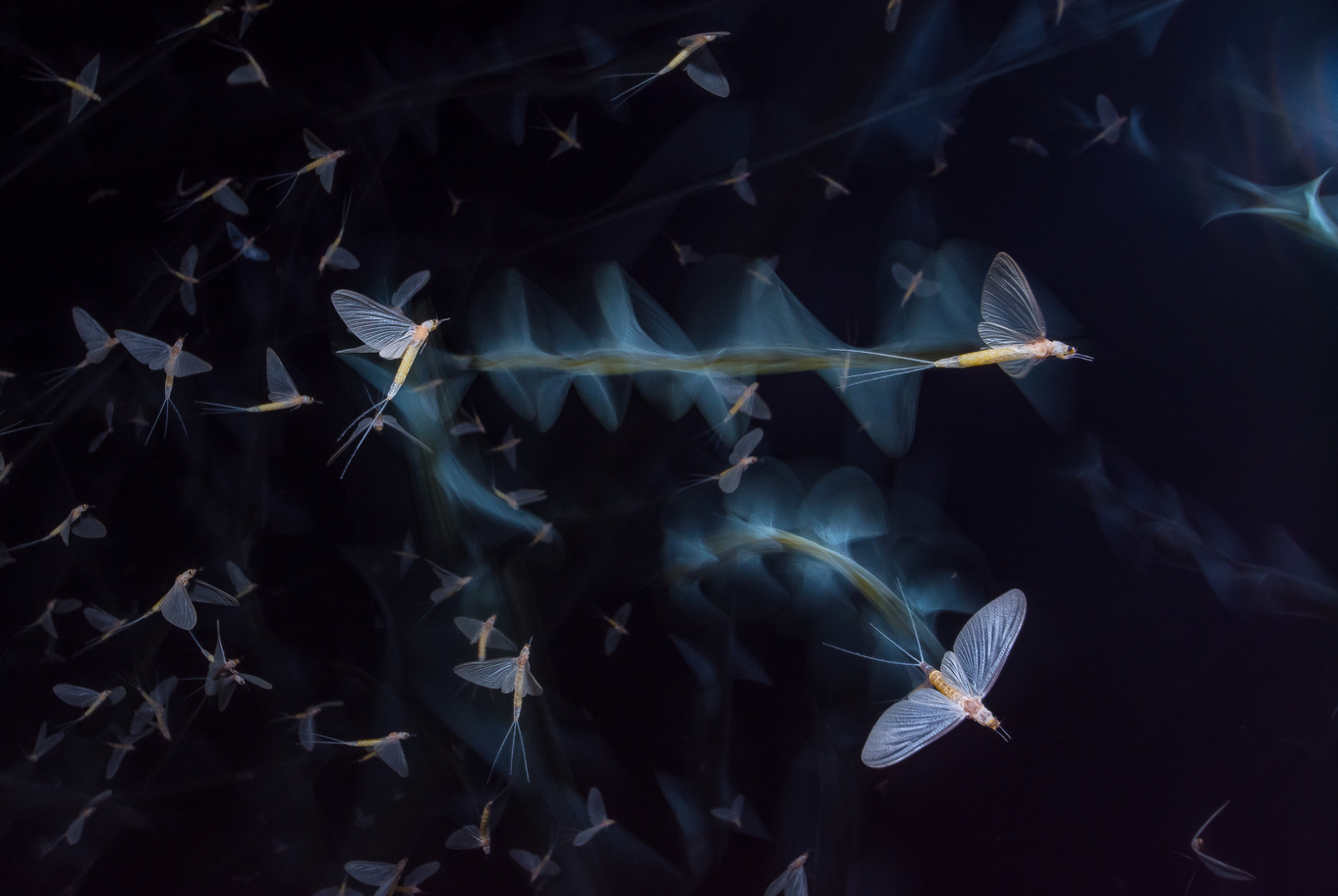 Researchers of the ELKH Centre for Ecological Research, Institute of Aquatic Ecology and the Institute of Biology of Eötvös Loránd University (ELTE) studied the spectral sensitivity of mayflies during their larval and adult life stages. Using electroretinography, they showed that the visual system of the virgin mayfly (Ephoron virgo), a protected species in Hungary, adapts to changes in light conditions during development.
The study, which presents their results, was published in Proceedings of the Royal Society B.

Larvae of the virgin mayflies hatch from the eggs around April, they feed on organic material in the river bottom and develop until the swarming period, which takes place late summer. Swarming starts after sunset during twilight. The larvae float to the surface, where they emerge. The males undergo an additional moult, and after mating, the
fertilized females fly a few kilometres upstream above the river so that the eggs become laid into the water approximately at the same place where the previous generations developed.

The swarming of the virgin mayfly is restricted to a relatively short time frame during twilight, when the environment is almost completely dark for the human eye, but the scattered light of the sun still dominates the sky. At this time the content ratio of blue and ultraviolet photons compared to longer wavelength components is the
highest in the skylight.

In their most recent study, the researchers measured the spectral sensitivity of the compound eyes of larvae and adults of the virgin mayfly with electroretinography and found significant differences between these life stages. “The larval eyes were mostly sensitive to the green spectral range, while the eyes of the adults had a sensitivity
maximum in the ultraviolet” said Ádám Egri, research fellow at the Institute of Aquatic Ecology, the first author of the study.

The virgin mayfly develops underwater, where the short wavelength light is filtered out in the turbid water. This means that the green, yellow and red wavelengths are dominating this underwater world. Thus it is advantageous for the larvae to have eyes being primarily sensitive to the green spectral range.

Using webcams images, the researchers determined that the virgin mayfly typically swarms between solar elevations of 14 and 7 degrees below the horizon, when the content ratio of ultraviolet and green photons is the
highest in the skylight. Thus, the primarily ultraviolet-sensitive eyes of adults suggests adaptation to the light conditions of the twilight.

“We have previously shown that the virgin mayfly is mostly attracted to ultraviolet and blue light, which is in accordance with our new results” said György Kriska, associate professor at ELTE, who began to study the mass swarming and the streetlight-induced mass perishment of mayflies in 2012.

The mass perishment of the virgin mayfly at illuminated areas, e.g. bridges, is a well-known phenomenon, which can be reduced by the correct choice of the spectrum of outdoor lighting. Most short-wavelength light sources, such as the bluish cold-white LEDs, attract far more mayflies than the yellowish, warm-white LEDs which emit
light primarily in the longer-wavelength spectral range.

Thus, these results support the general agreement that long-wavelength artificial light cause the least ecological damage to the environment.