The Ecology of Spider Sociality: A Spatial Model 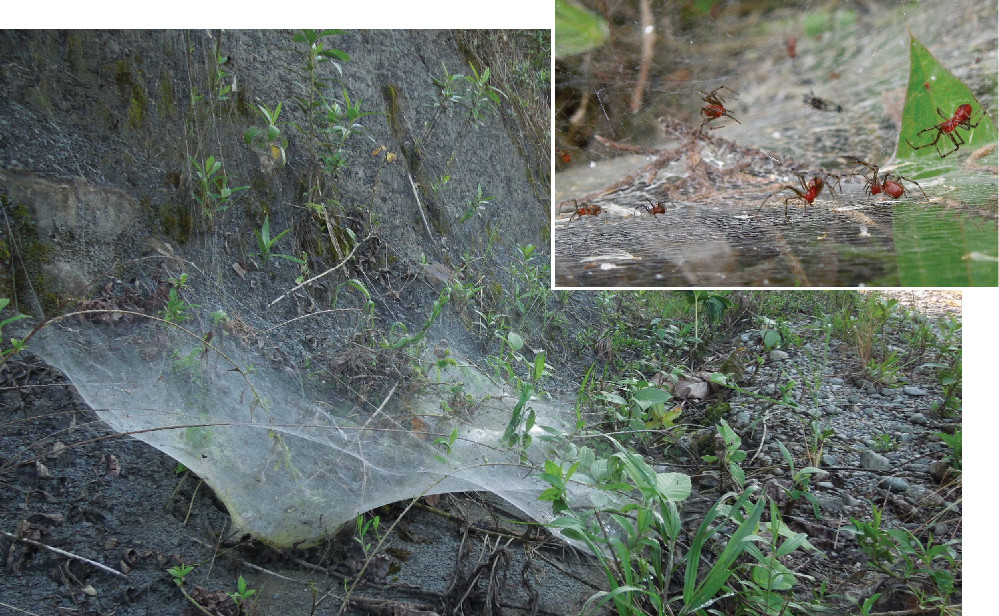 Zsóka Vásárhelyi and István Scheuring, researchers at the Institute of Evolution, Centre for Ecological Research, and Leticia Avilés, a researcher at the University of British Columbia, studied the geographical distribution of spiders with varying levels of sociality by modelling the Eastern slopes of the Andes in a computer simulation. They have shown that the ecological characteristics of a given habitat fundamentally determine whether social or subsocial species live in that habitat. The study presenting the results was published in the journal American Naturalist.

Spiders are typically known as solitary and aggressive animals, yet there exists a handful of spider species in the tropics where closely related individuals live in a common web. They maintain their dense, three-dimensional web together, they subdue and consume their prey together, and they care for the offspring together. These species are called social spiders. Their study may contribute, among others, to a deeper understanding of the evolutionary and ecological background of social behaviour.

It was empirically observed that with increasing altitude and latitude social spider species are being replaced by less cooperative, subsocial species, which, although characterised by long maternal care, do not show extensive social behaviour. The question naturally arises, what factors shape these geographical species distributions.

In the corresponding literature two separate hypotheses were offered to explain this pattern. According to the Prey Size Hypothesis, a common web (and a social lifestyle) is only worth maintaining where a sufficient amount of large prey are available. Although the surface-volume ratio of the web decreases with the size of the colony, the size of the prey items, available only for cooperating collectives, can compensate for this effect.

In contrast, the Disturbance Hypothesis suggests that where the environment is strongly disturbed (by wind, rain, or predators), solitary individuals cannot reproduce stably. This is because the dense three-dimensional web, characteristic of these species, is very expensive to maintain. If the mother is unable to care for her offspring long enough, for example, because of the energy loss due to web maintenance, the offspring will die before maturing. Thus, the two hypotheses suggest that the distribution of social species is limited by the size of the prey and that of the subsocial species by the degree of disturbance.

The researchers in their latest study modelled the Eastern slopes of the Andes with a computer simulation, incorporating the respective environmental gradients (changes in the maximum size of prey animals and the degree of disturbance). They then placed several social and subsocial “virtual colonies” into this modelled habitat, and observed which species survived in which environment, with what success.

The model illustrates well that together the prey size and the level of disturbance can indeed re-generate the naturally occurring distribution patterns. The researchers have shown that high disturbance is not only responsible for destroying small colonies, but can also have a potentially stabilising effect, especially in the largest colonies. The results suggest that the ecological characteristics of a given habitat may have a significant impact on the social behaviour of the species living there.

Image: A social spider colony and some of its members (top right). The images show one of the species that inspired the study (Anelosimus eximius). The photo was taken by L. Aviles in Equador.